I have a number of tasks scheduled to run once a day. It seems that if one of them gets stuck and fails the other tasks wait to run after the first one finishes. Is this true?

Also, the task that fails seems to try multiple times before it fails is there a way to know where it gets stuck? or maybe to have it run once and if it is unsuccessful to let the other scheduled tasks run before it tries again?

Finally while the first tasks was running the gui was inaccessible so there was no way of stopping it or even finding its task id, is there an easy way to do this?

Thank you, below is the timeline of the task trying to run before it fails: 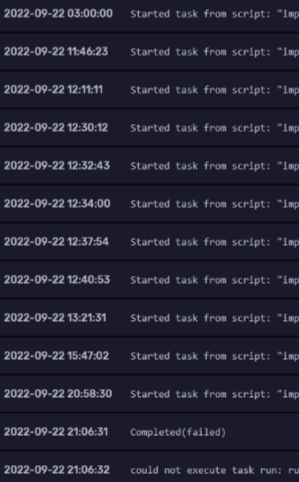 Hello @balab,
The run of the tasks shouldn’t be dependent on each other as far as I know. I think they run in parallel. I think there used to be a retry flux task option, but I don’t see it anymore. I’m asking the team about that. If they don’t run in parallel, I don’t know how to configure that. I’m asking around. Thank you for your patience.