Since the apt repos provided only contain the lastest/bad version, it’d be nice to have at lease 4-5 versions. I was able to find the github release page and grab the version I needed v1.8.6 to get back in business. 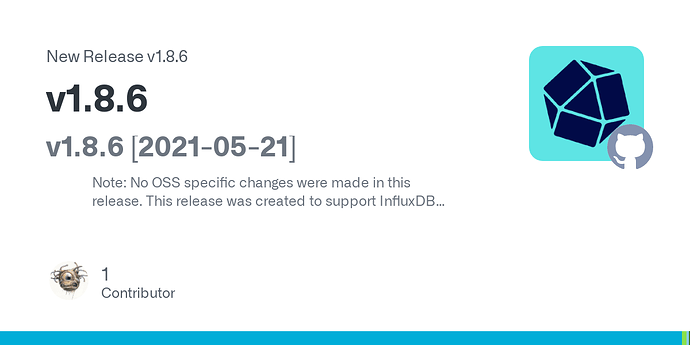 Thanks for this info. I am not an expert. How do I go to downgrade to version 1.8.6 ?
Thanks

I had the same issue just yesterday. It seems they changed something in the startup script in version v1.8.9, the same one we had to +x on version 1.8.7.
Turns out my DB is too big and it takes longer to start than the 10 seconds influxdb expects to take and so the start script aborts the process
Workaround:
Open /usr/lib/influxdb/scripts/influxd-systemd-start.sh
either comment out line 34 (exit 1) – < this is a bad idea in the long run but will allow you to test if it works
or set the sleep command in line 29 to 10 seconds (depending on how long does it take your influx to start, for me 10 cycles (line 25) of 10 seconds was enough)

commenting out “exit 1” made the trick.
Thank you! I had headaches for 2 days

You are a star!
Thank you. This solved the issue for now.

Same issue, however when starting from the command line it did a lot more work than normal.
That said, revering to last nights backup, disabling update fron influx until this is sorted.
Two Mondays in a row where what has been one of the most stable products I have ever used, now not fit for purpose.
Please try testing before releasing.

Thanks, downgrading to 1.8.6 helped. Nothing else did. Even version 1.8.9 was not starting.

Perfect, thanks for the solution. It solved my issue

I’m new and from the south of France.
I have downgrade my paquet rasbian by command beware
sudo apt install influxdb=1.6.4-1+deb10u1

Hope this wil resolved in a future version. Not nice to search the internet for a solution this new and hard to find.

Thank you. Your answer should be bumped up on search engines.
I set the sleep command to 10 seconds and the issue is gone.
Before finding your suggestion, I was puzzled that influxdb could be started manually but not with the script.

This not the solution, what happens if the influxdb startup activity take 11 seconds.
The script should check that the service is up.

As a raspberry pi user I have had the same issues. What worries me is the potential for self inflicted corruptions when investigating and trying to resolve these random and seemingly inexplicable problems. It makes one unwilling to update a working system too. I have I think resolved things now with the fixes above, but I remain nervous.
Paul

Just done an install on a brand new Debian11 (Bullseye) and got the same old issue of non starting
Tried all the hints here, not starting

curl is not installed on a base debian.

I am sure someone is going to say RTFM, its on page x, line y

and it still worked, even over a reboot.

The proper way is to add dependencies to your package and install them prior to your own software.

Hi, the reason is not the sleep 1, its just fixes it. The real reason is, that the while loop is checking the first result over and over again, as the result variable is not updated after the first try (as it is out of the loop and only run once).

So to fix it, the curl command needs to be re-executed, otherwise the script will check the first result over and over again, until max attempts is reached, even if the webservice is already reachable.

On Github is a new Version of the Script, which maybe fixes that, but be aware that this one does things differently so you should only grep the parts you need. influxdb/influxd-systemd-start.sh at 8e5a0705a3c14c69ab681268c4d7aecd98204434 · influxdata/influxdb · GitHub

fix this please i beg you, raspberry pi zero
sleep 10 not working, commenting exit 1 is not working
sudo chmod +x /usr/lib/influxdb/scripts/influxd-systemd-start.sh is not working
there are no clear instructions for downgrading to 1.8.6

articles from pimylifeup, randomnerttutorials and whatnot lure the iot not so linux experienced amateurs to use influxdb and in case of a problem like this we stare at the walls and don’t know where to search for the solutions.
another update reset the privileges of the config file folder now this.
yeah, BuT gRaFaNa NaTiVe InTeGrAtIoN !!1
please help

First download old version, then install it with dpkg and finally mark influx to be held from updates until vesion with a fix is released. Something like this (showhold is optional, it’s just to verify hold):

When new influx with a fix is released