I am using an InfluxDB v2.4 in a Docker Container in a VM. I have multiple Telegraf Instances writing data to the Influx and a Grafana with multiple dashboards visualizing the data from the Influx.
At the end of September, my coworker drew attention to the fact that the InfluxDB allocates all 16 GB of RAM on that VM and that all Dashboards are building up very slowly. I’ve read about Series Cardinality and the impact on memory consumption, but we first wanted to increase the available RAM to see if this would be enough to resolve the issue. 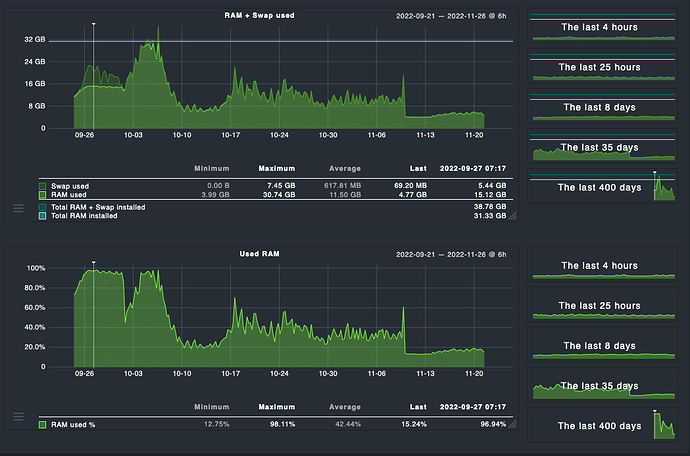 image1049×694 115 KB
At first, the consumption grew from 16 GB to 32 GB and it looked like the data had to be adjusted to lower the Memory consumption of the InfluxDB. But shortly after that the consumption lowered to around 8 GB and never reached the 32 GB again. A few weeks ago, the consumption even dropped to ~4GB without changing anything with the InfluxDB or the other components reading/writing on the DB.

So my question is: Why is the memory consumption of the InfluxDB so inconsistent? Is there some sort of garbage collection or compression going on after fixed time intervals?